I love my husband not only because of who he is but also what he strives to be. And of late, his goals have included long-distance running. His ambitions require little of me except a supportive attitude and the ability to not worry too much when he disappears into mountains for hours of training. To be honest, I was relieved when one recent weekend was devoted to his first event: the 50K of the Leona Divide 50/50. At least when he disappeared this time, I knew there would be plenty of people nearby if he got dehydration, a twisted ankle, or a snakebite.

Because running 31 miles in the mountains isn't challenging enough, we camped the night before. TJ found a RV park less about 500 meters from the race start. He actually relented to bringing our air mattress for some comfort, but by the time we got to the campground, about 10 p.m., we couldn't find the manager, much less an electrical outlet to blow up the mattress. So TJ got about 5 hours of sleep on the hard ground with a lullaby of nearby karaoke before we awoke at 4:30 a.m. At the campsite, he readied all of his fluids (top left), then we headed to the race start, where he prepped the rest of his gear (top right). It just began to get light as the runners took off at 6 a.m. The early start time didn't dissuade TJ (in the bottom picture right behind and between numbers 222 and 328) and about 500 other runners from setting off for the hills. 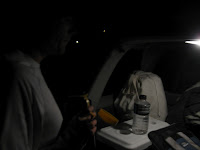 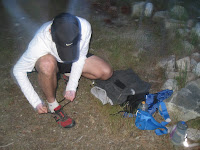 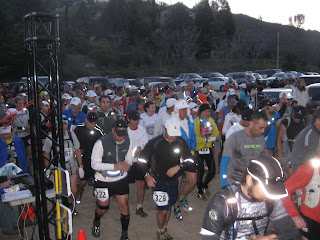 After TJ was on the trail, I went back to find the campground manager. With no luck, I left cash in her door, then headed for the aid station, where I would be able to help TJ at miles 16 and 24. But really, he didn't need much help. During his first time past, I suggested that he give me the shirt that was tied around his waist, then he got some love from Sage (top) and some water in his bottle (bottom left) before he was off again (bottom right). I forgot to take photos the second time he came through the station, mainly because when the husband of one of the girls I was sitting by came through, he looked, well, wobbly. So when TJ passed by, I was trying to evaluate whether he still felt okay. He did, so he picked up more water and some ice, and sped toward the finish line. 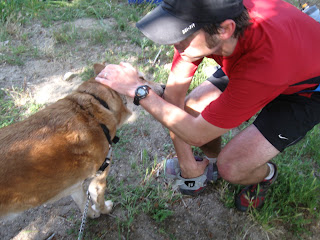 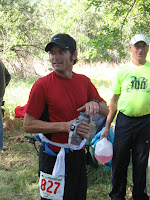 And when he crossed, he was even able to put in a healthy kick up the last pitch (top). I had brought TJ a celebratory beer that I was going to keep hidden if he didn't look well, but he seemed fine (bottom left), basically the same as at the beginning of the race (bottom right), just with less clothing, a medal, and daylight. I let him drink his Sam Adams in peace without photographic intervention. 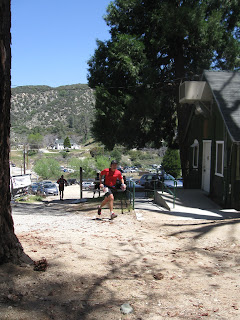 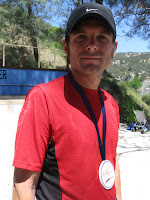 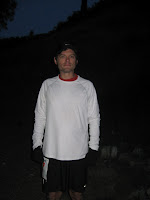 Bottle drained, we went back to the campsite, where TJ freshened up as much as he could without running water and we informed the manager we would be staying another night. Lake Hughes, whose shores came up on the campground (left), and the nearby Rock Inn (right) convinced us there was enough charm in the area that we could put off driving home for another day, even if it meant another night in a tent. 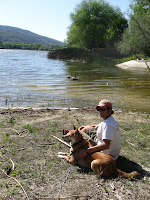 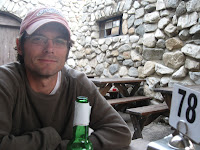 But it also meant that we could indulge ourselves. At the Rock Inn, we ordered buffalo wings and its famous and fitting 50/50 sandwich, half tri-tip and half BBQ pork (left). And this big supper was after a linner (lunch/dinner) of free and generous fajitas that TJ got for finishing the race (right). We stayed for the entertainment, country musician Brant Vogel, at the Rock Inn, but eventually sheer exhaustion for TJ and a food coma for me led to us calling it an early night. 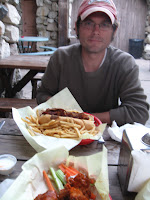 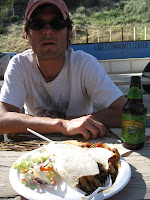 With TJ's success (he hates when I brag on him, but it must be said: This was his first race, and he finished 33nd out of 123 in the 50K), I wasn't surprised when he declared that he wanted to try a 50-miler next. I just didn't realize it would be on the following weekend, on a bicycle. Because I had decided I wanted to do it once while in Tijuana, I knew the Rosarito-Ensenada Bike Ride was coming up on Cinco de Mayo, but I didn't deign to bring it up, knowing that it was a week after TJ's race; I just figured I'd wait for the fall ride. But when one of TJ's co-workers invited him, he was sold. As were many others, apparently: the Leona start had nothing on the Rosarito start, which had 5,000 people lined up on all manners of bicycles: tandems, cruisers, and even low-riding BMX models. 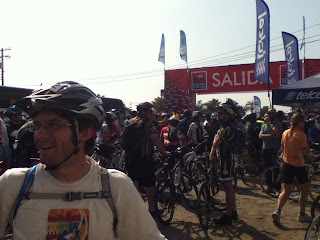 Throughout the race, TJ pointed out many great taco shops where we could stop for a beer. I didn't relent until we had made it up El Tigre, a not very steep but a very long hill, and saw this welcoming spot in the middle of the plateau, where many people were waiting for friends to pass by (left). TJ and I had managed to stay together (most likely because he was tired from the run the weekend before), so we were able to share some cervezas (right) 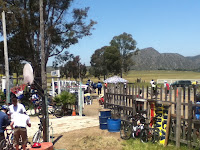 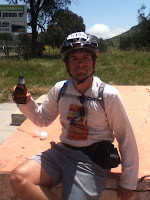 For me, the beer was a good idea to take the edge off coming down El Tigre. The speed of the descent scared the crap out of me, but it was a nice break before the final flat push to downtown Ensenada, where both TJ and I met our meta, most thankfully without any crashes or falls (except the tostada with ceviche that I dumped on TJ's lap a little later). 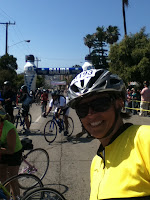 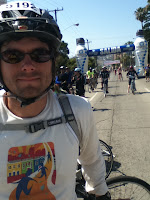 After parking our bikes, we took part in the "finish-line fiesta," which included lots of alcohol and food for pretty cheap, considering the captive and hungry audience. I had a piña colada and quite a few beers to wash down a couple of tacos (and an undumped tostada) while basking in my achievement -- and the sun (I have the farmer's tan to prove it). Just this side of dehydration and sunstroke, we caught the shuttle back to our car, so we could head home for yet another early Saturday night. 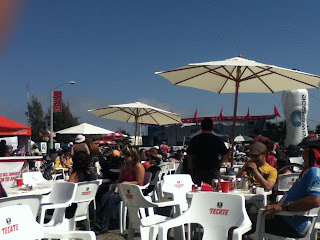 Although one event was in California and the other in Mexico, they both had similar vibes of not taking themselves too seriously. The organizer of the 50/50 gave instructions in an outfit reminiscent of Richard Simmons (left), and runners donned tutus, fishnets, and viking helmets. At the bar where we stopped during the bike ride, Scooby-Doo, a knight, a chicken, and a hula girl were gathered (although you can't see them all in the picture at right). Elsewhere on the course, we saw a banana, the wicked witch, Superman, a pig, a cow, and Little Red Riding Hood and the Big Bad Wolf on a tandem. 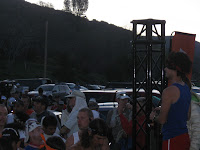 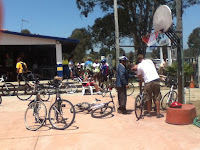 Another tradition on the bike race was for riders to throw candy to children who line up along the road to cheer them on. Between coming empty-handed and under-dressed, it almost makes me want to do it all over again. Just maybe not in back-to-back weekends, and remember, this is coming from the girl who didn't -- and will never -- run 50 kilometers.
Posted by Kim at 2:16 PM No comments: